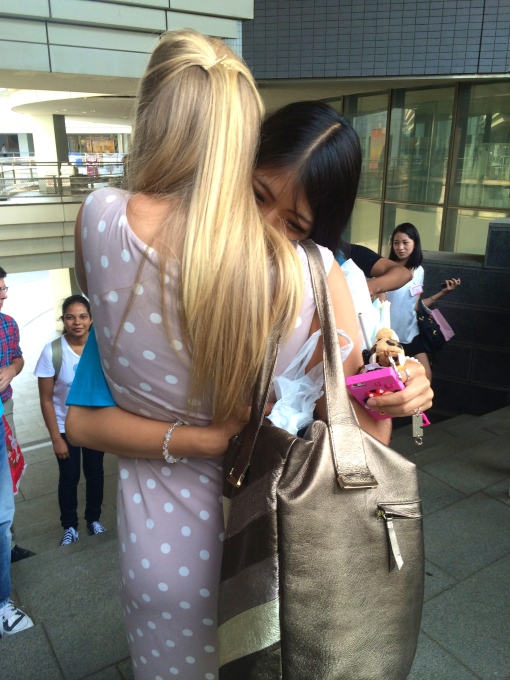 The last couple of days spent in Japan were full of heavy hearts and sad goodbyes. On Friday, Technos College held a closing ceremony. Professor John Yelding from Hope College (United States) spoke on behalf of the faculty, and I had the privilege to speak on behalf of the international students. It was an honor … Continue reading →

For me, the food is one of the things which stands out on our trip to Japan.  In fact, most of the students and faculty are keeping food journals and taking photos of each meal we’re served.  Please see below for a few of the interesting foods we’ve eaten in Japan.  Most are wonderfully delicious!  Darryn Diuguid

This dish was served to the faculty during our welcome dinner.   We grilled veggies, meat, and tofu.

Most everyone purchased this dessert at the Mt. Fuji stop.  As you can tell, it’s in the shape of the famous mountain!

This tempura and miso soup were served during the lunch when we made soba noodles.  It was one of my favorites dishes!

This beef curry dish was a big hit with faculty and students. We were able to order seconds, and I think everyone “cleaned the bowl” during this meal. 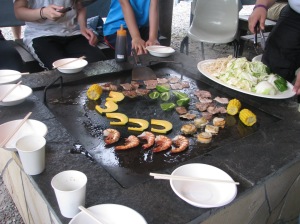 This hibachi type dinner was served at the Green Village by the Japanese students. After cooking the meats, the students prepared lo mein and more vegetables.

During out initial dinner with the Technos faculty, we ate this river fish as an appetizer. Interesting!

Who can resist conveyor belt sushi? You simply grab your selection off of the belt, and the plates are colored coded to a specific price. Fun times!

This is a typical Japanese breakfast: fruit, ham, egg, and condiments. Of course, you must eat with chopsticks; no silverware was in sight!

One of the most incredible experiences we had the opportunity to take part in was an optional visit to Disneyland Tokyo! Christin, a handful of Technos students, and I boarded the train after returning from Green Village and spent the next 90 minutes changing trains and trying to not fall over when no seats were available. When we finally arrived both of us started to squeal because, let’s be honest, there’s not a whole lot that is better than Disneyland. Because we arrived at the park after 6:00pm (4:00am home time) the tickets were half price, and we also got great spots to watch the parade of lights while eating our Mickey Mouse shaped sandwiches. After the parade, the park was almost completely empty and we were able to get on 6 rides in less than 2 hours. Disney was all ours!! Several hours later the park was closing, and we once again boarded the train for a long ride back. Regardless of the monotonous public transit the night was splendid and pretty close to perfect.
On Saturday morning, June 14th, Dr. Diuguid, Christin, a large portion of the International students, and myself spent two hours on the train to the baseball game! This specific game was special because it was between two teams from different leagues, so they rarely ever see playing time together. Because the game was between the Lions and Tigers the running joke was “Lions, and Tigers, and Bears, oh my!” (strictly for the Americans because apparently no one else had seen The Wizard of Oz, which made me surprisingly sad). I had a chance to try a Japanese hot dog, and I was not disappointed especially because it was paired with french fries. In the end, the game was excellent and the Lions won 3-2. That evening Christin and I attempted to eat at a local sushi restaurant, but we found out that the wait was two hours, so we made alternative plans. We ended up at a small place called Gustos that actually served American food, which was an excellent choice and I do not regret it for a moment. We both left as very happy girls!
Sunday June 15th came and we had to rise early to, again, board the train to attend a Kabuki Theatre show. This particular showing was called The Old Couple and in short it was a tear-jerker. After the show we decided to head to Harajuku (a town similar to New York City but smaller) to visit the flea market. The three of us and a few companions ventured around for a few hours seeing the goods from Japan, India, Pakistan, Mexico, and Hawaii. That night for dinner Christin and I set our minds to eating sushi NO MATTER WHAT. So we waited 2 1/2 hours at the same place around the corner and it was worth it! What was interesting about this specific dive was that you placed your order directly on a computer screen at the table and then the rolls are delivered on a conveyer belt! Neat, right? We each declared that we were not leaving until we were completely full because we had waited so long, and it was SO worth it.

So, as you can tell, there is no shortage of food, fun, and new experiences!
Cheers,
Mariah Lyn 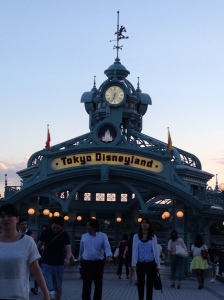 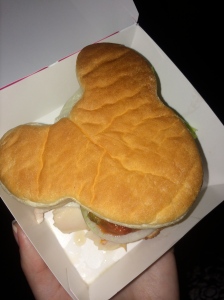 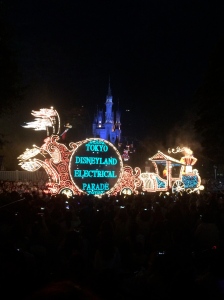 The castle, obviously lit in McK Bearcat Purple just for us!

Reppin’ the Cards at the baseball game 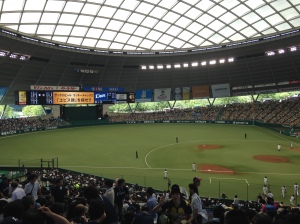 Seibu Dome, home of the Lions 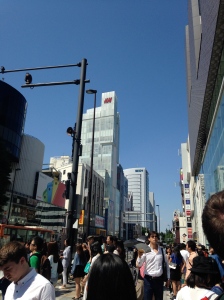 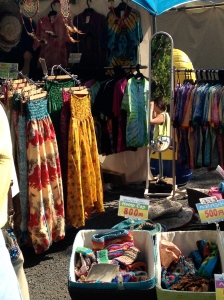 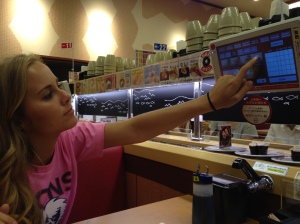 Because we couldn’t have enough sushi 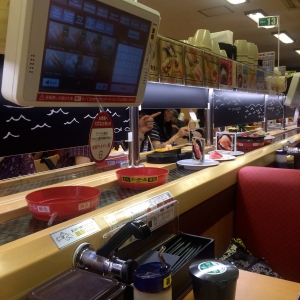 On day two we began cultural introductions to Japan. That morning, the group of international students loaded a bus to head to the Technos Language School, which was about an hour away from the hotel. The language school presented a PowerPoint presentation in order to explain their programs, students, and typical class day. Directly after the presentation, we all moved to a nearby classroom to learn how to make sushi; it was extremely interesting and very delicious! Our second day ended with a trip back to the Technos College, where each group presented PowerPoint presentations about their schools and themselves. Mariah and I had so much fun representing the United States, McKendree University, and ourselves. At the end of our presentation, we demonstrated a line dance, in order to bring some “Midwest culture” to all of the international students. We had a few Japanese and New Zealand students who even joined in to learn the dance and then we performed it to the rest of the students and faculty. Overall, everyone had a very enjoyable time and seemed very intrigued by McKendree and the Midwest.
The next few days marked the beginning of amazing experiences full of countryside beauty and true Japanese culture. On Wednesday morning, June 11th, the group left the hotel by bus to venture out to Green Village Spa, where we stayed until Friday morning. The beauty of the mountains, waterfalls, rice paddy fields, and the landscape as a whole was completely breathtaking and one that everyone should have the opportunity to experience. I do recall Dr.Diuguid and myself mentioning how very fortunate we were to experience the beauty that was all around us. We also made a few stops on our way to the village. First, we stopped halfway up Mt. Fuji, Japan’s largest mountain. It was slightly foggy, but the view was still remarkable. Soon after, we went to a traditional Soba Noodle House and were divided into several groups. Here we learned how to properly roll out and cut Soba Noodle dough and each group got to eat their 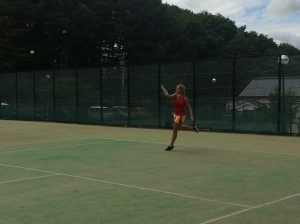 I beat Dr. Diuguid… not. 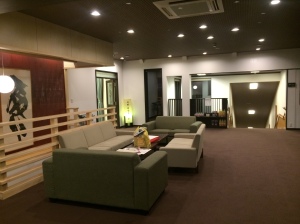 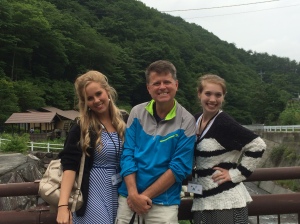 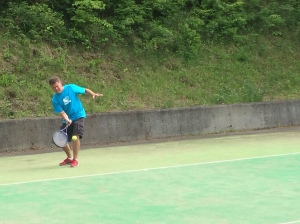 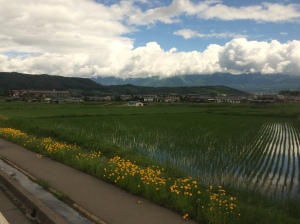 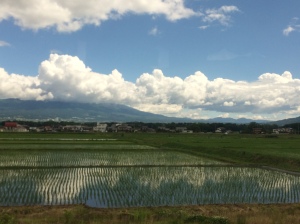 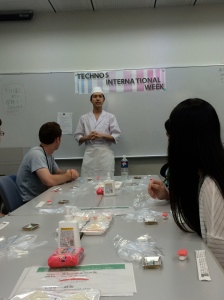 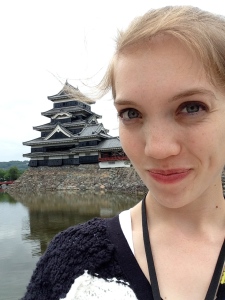 own Soba Noodles for lunch. This process was very traditional and strongly represented Japanese cooking techniques. Lastly, we went to Matsumoto Castle. All the students got to tour the five story castle, which still stood in excellent condition even after thousands of years.
Following all of the incredibly interesting stops, we arrived at Green Village Spa. The spa was very traditional and many students’ rooms only had mats to sleep on. We also had to take gender separated community showers during our stay at the spa. The only full day was spent playing sports and other games that were arranged by the Japanese students. It was a great day of relaxation, fun, and memories! Later that evening for supper, the Japanese students cooked everyone food outside at a Japanese style BBQ. The food was amazing and the company was even better. There is no question that Green Village Spa is a memory that none of us will soon forget and one that created lasting bonds of friendships between the students as well as the faculty.

Our first day was crazy, fun, and exhilarating all at the same time. First, we assembled in the hotel lobby to take the local bus to Technos College where we entered the Welcome Ceremony on a red carpet. This was a crazy event because every single Technos student was screaming greetings and were all quite excited to see us. Each school entered one at a time, was asked a few questions on stage, and took our place on a balcony to continue waving. After the ceremony Christin was a bit of a celebrity with her long blonde hair attracting the eyes of dozens of students asking for photos. As a group we gathered in a room off the cafeteria for the Welcome Party complete with food, drinks, and introductions galore.
Once the party was over, all the International students (so the non-Japanese) were put in random groups to go on a tour of the surrounding areas. The first stop was the Okunitama Shrine where we learned how to initiate our own cleansing ceremony where our hands and lips are purified. The next stop was Round 1, a popular game center for Japanese teens to spend the afternoon. Our last tourist stop was at the 100 Yen store, which is the equivalent of an American Dollar General Store. I happened to run into two American missionaries who gave several tips on how to make the following weeks a success. Finally, we ate dinner in a food court at a mall called Kururu.
All in all it was a successful first day, but many more followed with excellent stories. 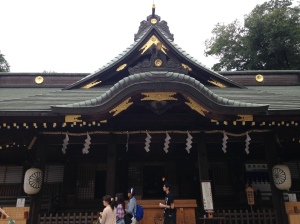 Hi, Everyone,
Welcome to our Technos 2014 blog. Mariah Logan and Christin Austin have joined me on this year’s Technos trip. Technos College has created partnerships with several universities around the world in order to promote Japanese culture. Faculty and students from New Zealand, Minnesota, New York, New Hampshire, Taiwan and Maine met in Tokyo on Sunday. Please enjoy the first few photos from our international exchange. Thank you for visiting our blog. Darryn Diuguid. 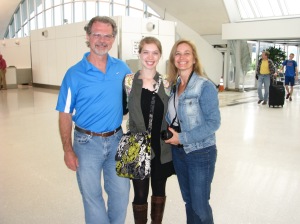 Mariah Logan and her parents 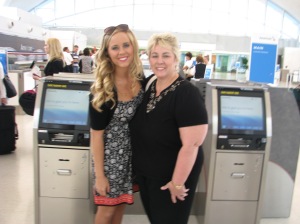 Christin Austin and her mother 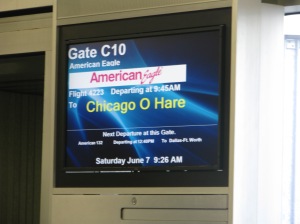